Bamboo thriving after being uprooted by cyclone 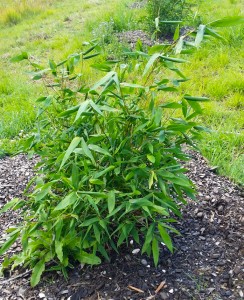 Bamboo transplanted from the Rockhampton cyclone to the Woodfordia site loves spring and recycled water and is doing fantastically well. 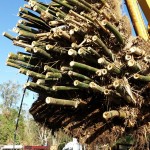 After significant trimming, the bamboo clump is loaded onto the truck.

In early 2015 Cyclone Marcia toppled over a control clump of bamboo that was planted next to the original Rhizopod installed in 1998. However, the bamboo planted in the Rhizopod system went through the cyclone unscathed.

The bamboo clump that fell over was given a very significant trim loaded onto a truck at transported to the Woodfordia site; home of the Woodfordia Folk Festival. It was further broken up (with much effort and lack of delicacy) and segments of the clump were planted along the boundary of a recycled water irrigation area.

All of the clumps are thriving with numerous new shoots and leaf growth. They are the start of a Woodfordia Bamboo Plantation that will be used for a multitude of artistic and architectural uses at the site.

We’re betting that no other plant that was uprooted during Cyclone Marcia has had such an exciting adventure.