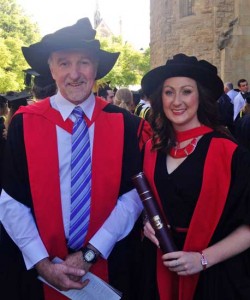 A focus of Brooke’s research was using a relatively new analytical technique to measure changes in copper stable isotope ratios to ascertain information about how copper behaves in soil and is taken up by plants.  Understanding the behaviour of copper in the environment is important as copper is an essential micronutrient for crop growth, but becomes toxic to plants when present in excessive amounts, often as a result of contaminating activities.

Brooke’s work found that dicotyledonous plant species were capable of changing the form (speciation) of copper provided to them to enhance root absorption, and suggested that copper could be absorbed by plants in the same manner as iron.  Furthermore, she identified that soluble organic complexes in the soil (or in waters) will preferentially and strongly bind the heavy copper isotope, leaving a greater proportion of light isotopes in solution available for absorption by plants.

Copper in the soil-plant environment

While the application of this technique for routine, commercial copper analysis and tracing in the environment may be a long way off, the results of Brooke’s  work have provided some key pieces to the big picture puzzle of how copper and its isotopes behave in the soil-plant environment.

Isotopes are atoms of the same element but with slightly different atomic masses due to the presence of varying numbers of neutrons in each isotopes’ nucleus.  As the name suggests stable isotopes are isotopes that are stable against degradation, as opposed to radioactive isotopes that radioactively decay over time.  We can compare the abundance of one isotope to another to determine what we call an isotope ratio. For example, copper has two naturally occurring stable isotopes; one with an atomic mass of 63 (light isotope) and one with an atomic mass of 65 (heavy isotope).  When we measure the amount of the heavy isotope and the amount of the light isotope present in a substance and divide them, we get an isotope ratio.  In the case of copper, we measure the amount of the heavy isotope and divide it by the amount of light isotope present to give us our ratio.

Stable isotopes have been used for some time for biogeochemical tracing to examine various environmental processes, however, traditionally these types of studies have been limited to lighter elements such as oxygen, carbon and nitrogen, as lighter elements have larger changes in isotope ratios, making them easier to measure.  The development of new technologies has enable the detection of the small changes in isotope ratios between reactants and products for heavy elements, e.g. metals like copper.  As a result, this type of tracing technique has now been opened up for use with a wide range of micronutrient and problem contaminant elements.  In order to use stable isotope ratio fingerprints to identify sources of contamination in plants, one must first understand how environmental processes after contaminant release (e.g. adsorption to soil particles, complexation by soluble ligands and absorption by plant roots etc) will change the isotope ratio of copper that is measured in the plant, hence, allowing the source isotope ratio to be back-calculated.

By understanding what types of reactions preferentially use the heavy or light isotopes, one can make inferences about what mechanisms are being employed at the soil-root interface by plants.  When the mechanisms of plant nutrient absorption are known, targeted fertilisers can be designed and soil management practices can be employed to create favourable nutrient absorption conditions.