The 2013/14 Woodford Folk Festival a resounding success for Arris

The 28th annual Woodford Folk Festival, an event of international standing, was held over six days and six nights from December 27th through to January 1st. Held on a 500-acre environmental parkland located on the Sunshine Coast Hinterland, on Jinibara Country, which is just over 1 hour north of Brisbane.

During the festival time Woodfordia is transformed into a village that hosts 1239 performances by 441 acts at 28 venues, with over 20,000 patrons and stallholders, 5200 volunteers and organisers. During the event the festival is actually the 67th largest town in Australia. 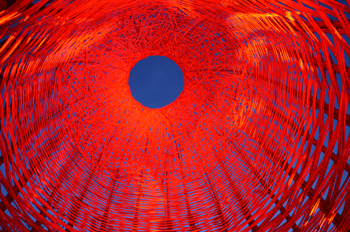 Bamboo architecture is becoming a major feature for the festival. The lighting effects make it look magical. Arris is looking to assist the Woodfordia to plant their own bamboo grove and have it irrigated with recycled water in 2014.

The festival went through more than 7 million litres of water processed by the potable treatment plant and over a million litres of beverages, which combined produced more than 8 million litres of sewerage that needed treating. The wastewater was produced from over 500 toilets, 350 showers, and 40 kitchens; and it was all treated at the site.
Arris Water upgrades conducted on the potable water infrastructure during 2013 resulted in treatment rates increasing by more than 100%. This meant that the Festival had an ample supply of high quality water for the event, even though ticket sales had increased by almost 10%. The sites entire water infrastructure; potable, wastewater, and stormwater continues to be improved on an annual basis.

The infrastructure improvements are essential on a site where the population goes from 20 people a day for most of the year to 25,000 a day between Christmas and New Year.

LEFT: The Fire Event occurs on the 1st of January every year with a unique theme. RIGHT: Street Theatre in the Monster Parade.

The Woodford Cricket Team posted the scores of the Boxing Day test and re-enacted all wickets taken during the test on the Village Green. Former Prime Minister, Bob Hawke dropped in for a bowl.

With more than 2,000 performers and 438 events featuring local, national and international guests, the event itself was fantastic with a wonderful program enjoyed by a fun-filled crowd.

Arris is proud to be a sponsor of the Woodford Folk Festival.