In early 2015 Arris won the tender to install a new wastewater treatment and dispersal system at the Keppel Sands Caravan Park, owned by the Livingstone Shire Council. 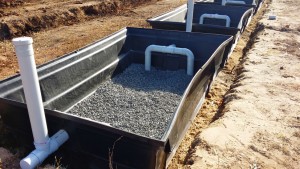 As a modification to the holding tank system previously used at the Caravan Park, we designed and installed a Rhizopod® no release system. This enabled us to reuse all the existing infrastructure at the site and incorporate it into the Rhizopod® system.

Part of our process include the install of a mixed media filter that has enabled the chemical toilet waste to be treated and reused at the site. The site is now a year old and during this time the Rhizopod® system has successfully reused all of the water produced at the site. This has resulted in a massive saving in operational costs. 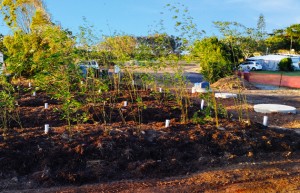 Planting throughout the Rhizopod® system

We had a great deal of fun installing the Rhizopods, just after Cyclone Monica had visited the town. Thanks to our generator powered mobile workshop, we were still able to meet our construction timetable.