Wisconsin Mounds are an internationally successful land application system developed in the USA. The sand filled mound is essentially a secondary treatment aerobic sand filter system positioned above the dispersal site. Water is removed by evaporation from sun and wind, and transpiration from the grasses and ground covers planted over the mounds. Any effluent migrating to the base of the mound is regarded as equivalent to secondary treated wastewater and is further treated and dispersed by natural soil absorption processes. Mounds would normally only be considered on larger allotments in areas with high water tables, shallow rock or very difficult soil types.

The system does require a pre-treatment step, such as septic tanks followed by a pump chamber. Wisconsin Mounds are best suited for the treatment and dispersal of treated water from clusters of domestic houses, commercial or industrial applications. The treatment system is capable of handling relatively large flows and sites that have fluctuations in wastewater generation volumes, such as sports ovals, caravan parks, restaurants and Cellar Doors.

Recently Arris, in conjunction with Hydroscape & Drasol, repaired a Wisconsin Mound installation in western Queensland. The original installation (not performed by Arris) had a distribution system that was susceptible to clogging by sewage sludge and plant roots.

Arris removed the clogged pipework and replaced it with a fit-for-purpose distribution system that is resistant to congestion and easy to maintain. The primary treated effluent is evenly distributed throughout the mound via a pressurised system. The pipework is surrounded by air, eliminating the risk of clogging by plant roots. Taps on the distribution system allow the pipework to be flushed; removing sewage sludge. The retro-fit was successful and a cost-effective option for our client.

See images of the project in the gallery below.

Testing of the newly installed pipework.

To find out more about Wisconsin mound
systems as well as other Arris Water treatment
technologies, click here.

Contact Arris Water to find out more about
our specialised water technology solutions. 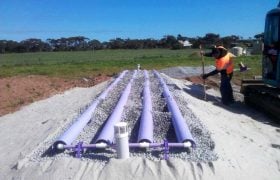 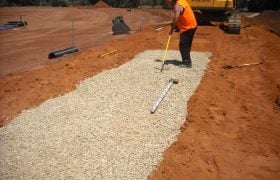 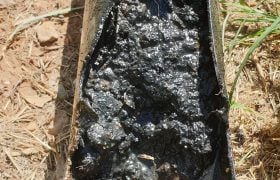 Clogged pipework to be replaced. 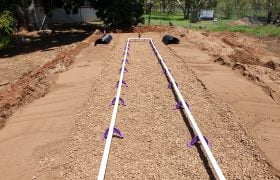 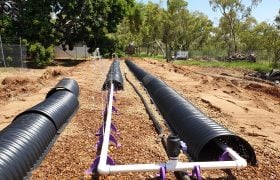 New pipework tested and covered to remain surrounded by air. 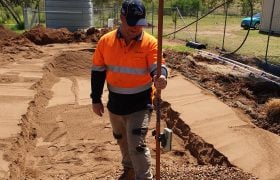 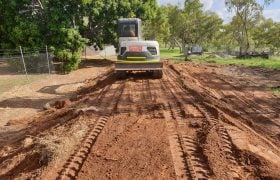 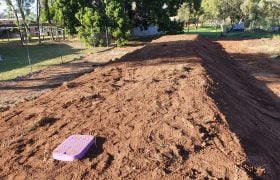