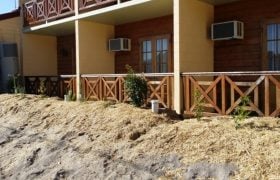 The wastewater treatment system site dispersal area at The Bororen Hotel and Motel had failed. The Motel had expanded onto the original reserve area for the dispersal area, and a pool fed by an adjacent bore had also been installed introducing a new set-back distance requirement. There was very little area left for any new type of wastewater dispersal system. The Rhizopod® system was selected because of its small footprint and its no-release design.

The peak flow at the site was 8000 litres but the average flow was below 4000 litres per day. The Hotel being located on the Highway has significant weekend traffic. The Motel section has a more consistent flow. Arris installed 5 concrete pods and 6 plastic pods. Each plastic pod is equivalent to 2 concrete pods in holding capacity and surface area. 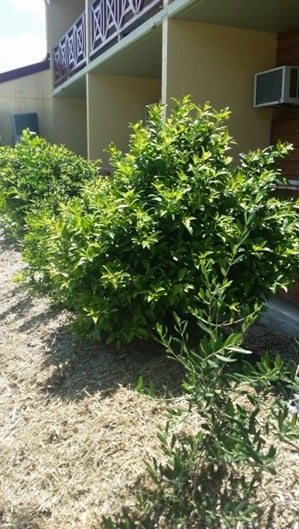 Concrete Rhizopods planted with a mixture of shrubs suitable for hedging, April 2015

Retro-fitted onto the end of the existing wastewater treatment system

We used a mixture of plants to help alleviate the adverse conditions of the site. Bamboos (clumping not spreading) can use up to 1000 litres per day per clump once mature. We have successfully grown bamboo clumps in Rhizopod® systems for over 15 years. The bamboo clumps were not suitable for the concrete channels as they are located adjacent to the motel building; they would shade out the rooms and litter the balconies with leaf mulch.

However, bamboo clumps were suitable in the area with the plastic channels adjacent to the car parks. The concrete channels were planted with a mixture of lilly-pillys, tea-tree shrubs (Malaleuca), and exotics. These shrubs use a significant amount of water, are resistant to disease, and can be easily hedged. These shrubs were also planted in the plastic channels to provide an understory to the bamboo clumps.

The installation has been successful and all of the water produced at the facility has been evapotranspired by the Rhizopod®system without requiring system pump-outs.

Find out more about the Rhizopod® no release system. 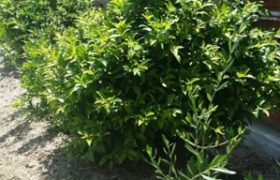 Concrete Rhizopods planted with a mixture of shrubs suitable for hedging, April 2015 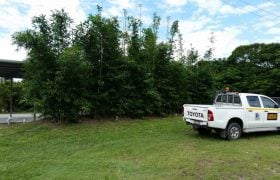 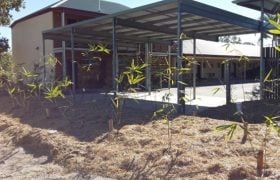 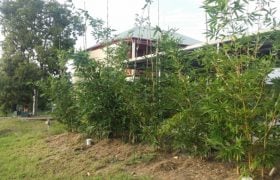 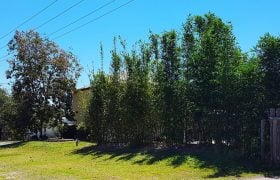 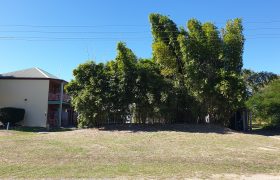 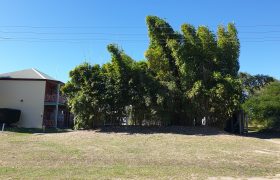 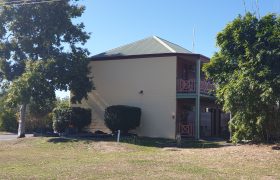